The sudden sound startled him. For, he was alone.

Whooshing sounds like the sound of soft fabric rustling, followed.

He freaked out when he began to hear an almost indistinct, thin, crawling, creepy voice.

He looked down at the book he was reading, his study material for his Ph.D. dissertation, on schizophrenia.

No, it couldn’t be. He was so normal, he was boring.

A long ‘Whoooooosh’ made him look up.

The suspended spider was the last thing he saw, it front legs pointing at him.

I started out with the above story and I thought it is not very original. So, I asked for another one. I got two more. The good thing about composing stories when you are in the shower is that they come pouring out of the water faucet 🙂 You may stop reading, or keep on reading (at your own peril) 🙂

Rochelle, please don’t think I am trying to pass off a 300-word story as 3 100-word stories. That was not my intent at all 🙂 They came to me during different times of the shower 🙂

There were spiders everywhere.

They were in various colours. Black, yellow, brown, white.

The large ones strode on all eights, powerful and tyrannical. The littler ones walked behind them on their sixes carrying insect parts between their fore legs, feeding the large ones when they turned and opened their mouths.

“Hey!” “You!”  He turned to see a large spider behind him, looking belligerent.

“What colour are you? You have to have a colour.”

He looked down at his body. It was a featureless grey.

Everything stopped and a mad stampede towards him began.

It was Spinne, the friendly neighbourhood video guy.

“Here are all the Spiderman videos we had, Mr.Webb. We are closing down and I know how much you love Spiderman. You can have them.”

“Thanks! All the best with your new business”

No Netflix for him tonight. He was going to Spiderman-binge.

The video player was dusty and after ten minutes of fiddling, it was attached. The oldest video went in with a whoosh. He pressed the ‘Play’ button.

The lights flickered, then dimmed.

Out of the video player, there poured a steady stream of spidery shapes, marching resolutely towards him.

I can imagine we will be getting a fair share of horror stories this week at Friday Fictioneers 🙂 Head over to Rochelle’s page for the rules for participating and to read her story. 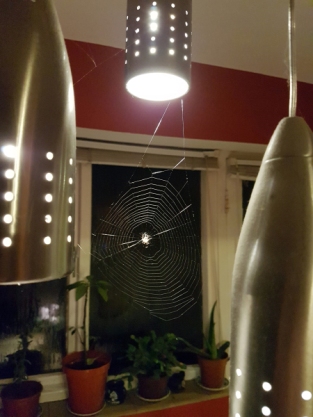